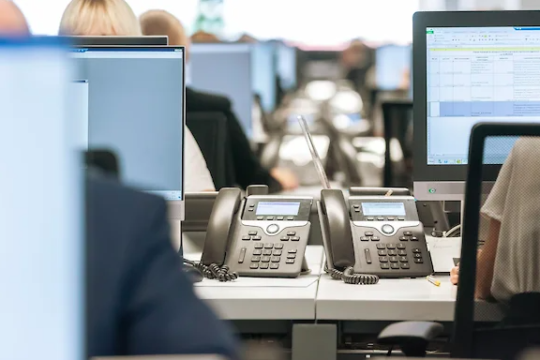 To promise doesn’t mean to pay

May 26, 2020, –  M.B.A. Finance took part in the study organised by NAPCA and  the publication of the newspaper  «Kommersant”

In the context of the pandemic and quarantine measures, malicious defaulters on bank loans, whose debts have already been bought out by debt collection agencies, are ready to talk to debt collectors, but have become less likely to keep promises to repay loans. The quality of such portfolios is low, and debtors lose almost nothing if they do not pay the debt. At the same time, due to the expected decrease in income of the population, debt collector market participants aren’t waiting for the situation to improve.

According to the National Association of Professional Collection Agencies (NAPCA), during the pandemic, the level of contact with bank debtors decreased, while for debts purchased by collectors (cession debts), citizens, on the contrary, are more willing to communicate.

The contact level is calculated based on the percentage of calls for which the specified phone number is valid, and the debtor is responsible for it. Thus, at the end of April, the average monthly level of contact for agency-based services portfolios decreased by almost 1 percentage point (p.p.) compared to March, to 27.8%, and by 7.9 p. p. compared to April 2019. The average contact level of cession debtors was 37.9%, which is 8.8 p. p. higher than in March and 7.1 p. p. last April. 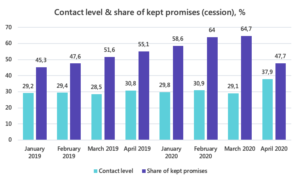 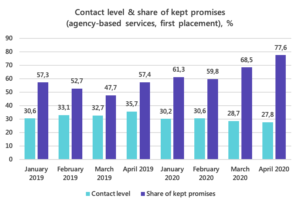 As for kept promises for debts repaying, the situation turned out differently: as for borrowers with whom debt collectors work under the agency-based services agreement, in April, the share reached 77.6%, which is 9.1 p. p. higher than in March and 13 p.p. higher than last year’s figure. For cession debts, this share decreased to 47.7% — by 17 p. p. by March and by 7.4 p. p. by April 2019.

The President of SRO NAPCA Elman Mekhtiev explained that in the framework of the agency-based services debt collection, the contact level was affected by emotional stress in the conditions of self-isolation, which increased the panic from often the first contact with a debt collector. “However, the high growth in the share of kept promises in agency-based services indicates the desire of bank borrowers to solve debt issues without waiting for a serious crisis of personal finances and fearing the deterioration of the financial situation, an accrual of fines and penalties for delay by banks,” adds Roman Volosnikov, the CEO of NSV.

“The delay period in cession portfolios is several times higher, debtors are not as motivated to pay their debts as debtors of agency-based services debt collection,” adds Mr. Mekhtiev. According to him, these debtors could not pay before, and in the current reality “decided to wait for”. According to Anton Dmitrakov, the CEO of EOS, decrease in the level of making promised payments in non-business April is primarily due to “the desire of some customers to rethink their financial capabilities in new circumstances.”

According to Yulia Kombarova, the Head of Legal Bureau No.1, a new type of debtors has appeared – citizens who work in the sectors affected by the crisis. “These debtors, as a rule, have gone out on a small delay, and debt collectors work with them still under the agency-based services agreement”, she notes. These citizens are more responsible and, despite the crisis, “try to return to a payment schedule, which explains the increase in collection under the agency-based services”, said Ms. Kombarova. “Usually, the quality of cession portfolios is significantly worse than portfolios under the agency-based services, so the share of kept promises for payment in this segment is lower», notes Alexander Bakhtin, the Investment strategist at BCS Premier. At the same time, according to him, the level of contact “is not always proportional to the desire to repay the loan, a borrower can be on contact and still be a defaulter”.

According to Fedor Vachata, the CEO of M.B.A. Finance, the situation will continue in the next few months: many will face the problem of providing for the family, and only then return debts. “In the context of the ongoing period of quarantine and, as a result, falling incomes, we do not expect an improvement in contact indicators and kept promises of customers,” said Pavel Mikhmel, the CEO of First Collection Bureau. He does not expect the recovery of indicators to the pre-crisis level until the autumn.